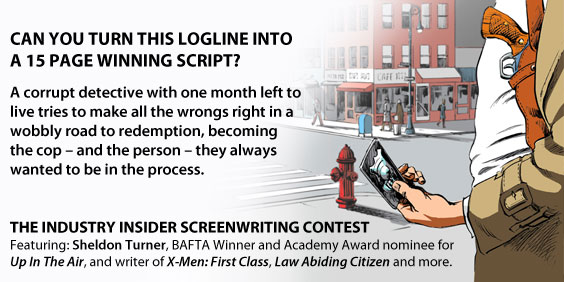 The ninth round of the Industry Insider Screenwriting Competition took place in the Spring of 2014, bringing in almost 1,000 entries that were eventually narrowed down to 10 Finalists. We are happy to be able to share with you the First 15 Pages of the Finalists' scripts based on Sheldon Turner's logline:

A corrupt detective with one month left to live tries to make all the wrongs right in a wobbly road to redemption, becoming the cop – and the person – they always wanted to be in the process.

Congratulations to Patrick Curran, winner of the Industry Insider Contest with his script, The Fragile Satisfaction of Us and Them.

Think you can turn this logline from Sheldon Turner, BAFTA Winner and Academy Award nominee for Up In The Air, and writer of X-Men: First Class, Law Abiding Citizen, The Texas Chainsaw Massacre: The Beginning and The Longest Yard into a killer script?

A corrupt detective with one month left to live tries to make all the wrongs right in a wobbly road to redemption, becoming the cop – and the person – they always wanted to be in the process.

“The entire process of the Industry Insider contest was a life and career changing event for me. The mentoring accelerated my writing skills (thanks Mario!!) and I learned not only how to better write a screenplay, but how to do so in an industry standard timeline. Since winning the contest in 2011, I have written four screenplays, each of which has won first place in prestigious contests, three shorts, all currently in pre- or post- production and was hired based on a writing sample, to write a feature for an Emmy and DGA award winning director. None of this would have happened without Industry Insider.” Mary Krell-Oishi, Secret Asian Man – Contest Winner (Simon Kinberg)

“There are a lot of contests that offer lots of prizes, but Industry Insider offers something no one else does... a completed screenplay. The result of my 15 pages finishing in the top 10 yielded my first completed product, and then won the grand prize of the very next contest I entered. My story mentor, Kay, was a true pro who knew exactly how to guide me through the inevitable roadblocks and provide the accountability and confidence I needed to get all the way to "Fade Out." – Nick Schober, Given (Susannah Grant Round)

“The value of this competition can be summed up in three words: "form follows function." There is no shortage of contests where prizes are offered for work created outside the confines of the contest itself. For us, this contest was unique and superior in its approach to what ought to be the function of any screenwriting contest: to build better writers, honor the art of storytelling, and pass along unparalleled advice on the industry. Does it work? Well, this testimonial is being written between a development meeting at an independent studio to another appointment with a community-outreach program wanting to collaborate on filmmaking projects to raise awareness of teen suicide. Prior to this, only our closest friends and family even knew we wrote screenplays. Where did the sample of writing come from that opened up these opportunities? We’ll give you one guess…” - J.L. Newman & J.A. Mayfield, Forecast (Edward Saxon Round)

“Sounds like a cliche but winning the Todd Garner round of the Industry Insider Screenwriting Contest was life-changing. Not only did it open my eyes to what's expected of working screenwriters, it also opened more channels with legit industry folks who will happily read my scripts now. On top of that, the mentorship that finalists get is like taking a one-person master class in screenwriting. Don't miss out!” – Paul Boyer, Triangled – Contest Winner (Todd Garner Round)

Working from Sheldon Turner's logline, you’re challenged to create up to the first 15 pages of an original script based on the given concept. Make it your own - setting, time period, character's gender, genre… anywhere your imagination takes you.

Here's how it works:

Lush Accommodations at the Chateau Marmont
The chic Chateau, conveniently nestled right off the Sunset Strip, will serve as the home base for the Industry Insider Screenwriting Contest winner. Thinking of the many opportunities to network and hobnob with the Hollywood elite that frequent this hotspot is mind-boggling!

One-on-One with Sheldon Turner at The Ivy
First on the agenda? Lunch with screenwriter Sheldon Turner at Robertson Blvd.’s uber-popular bistro, known for its steady stream of celebs and location near power-agency ICM. The winner will take in some serious knowledge and know-how from Turner, while filling up on the Ivy’s famous nouvelle American cuisine.

Meeting with Benderspink
The Hollywood treatment continues through a conference with Benderspink, a diversified management/production company with credits including The Hangover, American Pie, and The Ring. Aspiring screenwriters dream of this kind of opportunity to meet with such an influential group, a fantasy that will come true for the lucky winner!

Movie Magic Screenwriter - Professional Formatting Software
Format your script and outline it, too, with the newly redesigned Movie Magic Screenwriter 6! This award-winning screenwriting software formats movies, television, novels, stage plays and even comic book scripts, making it the only program for all types of creative writing.