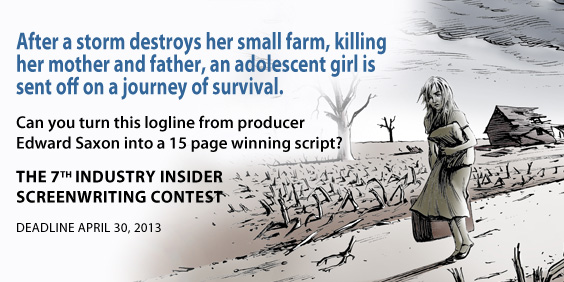 The seventh round of the Industry Insider Screenwriting Competition took place in the spring of 2013, bringing in almost 1,000 entries that were eventually narrowed down to 10 Finalists. We are happy to be able to share with you the First 15 Pages of the Finalists' scripts based on Edward Saxons logline:

“After a storm destroys her small farm, killing her mother and father, an adolescent girl is sent off on a journey of survival.”

Congratulations to JR Phillips, winner of the Industry Insider Contest with her script, The Badlands: Dead Girls Don't Cry

Your 15-page submission isn't due until May 7 as long as you enter on or before April 30, 2013.  At the end of the checkout process you will be provided instructions on how and where to send your submission.

Click here to learn about the success of last round's winner, Tyler Marceca, and his winning script "The Disciple Program."

Here’s how it works:

One-on-One with Edward Saxon at The Ivy

First on the agenda? Lunch with producer Edward Saxon at Robertson Blvd.’s uber-popular bistro, known for its steady stream of celebs and location near power-agency ICM. The winner will take in some serious knowledge and know-how from Saxon, while filling up on the Ivy’s famous nouvelle American cuisine.