Jeffrey Alan Schechter has been beating up stories for more than twenty years. He is a WGA, WGC, Emmy, and BAFTA-nominated writer, producer, and director, a million-dollar spec screenplay writer, a Gemini award winning producer, and the developer of the underlying story principles behind Mariner Software’s Contour Story Development program.

Jeff's first credits were in action films such as Bloodsport 2, The Tower, and Street Knight. Turning to his love of family films, Jeff sold his spec screenplay Little Bigfoot to Working Title Films and then worked on The Amazing Panda Adventure, Dennis the Menace Strikes Again!, It Takes Two, The Other Me, and Beethoven’s 3rd, and two Care Bears movies: Journey To Joke-A-Lot and Big Wish Movie, for which he was nominated for a Writers Guild of Canada award.

Jeff’s spec screenplay Stanley’s Cup was bought by Walt Disney Pictures in a deal worth more than a million dollars, leading to him working on I’ll Be Home for Christmas and the Disney Channel movie Brink!, for which he was nominated for the Writers Guild of America Award for Outstanding Television Writing. Recently, his TV movie, Out of the Woods, premiered on the Hallmark Channel to record ratings.

In episodic television, Jeff has written and/or served as executive story editor on dozens of episodes for series such as The Famous Jett Jackson, Animorphs, Martin Mystery, Totally Spies!, Team Galaxy, Get Ed, Freefonix, Di-Gata Defenders, Hot Wheels: Battle Force 5, and Jane and the Dragon. He was an executive story editor and director on the hit Discovery Kids/NBC series Strange Days at Blake Holsey High (aka Black Hole High), for which he was nominated for two Emmy Awards for Outstanding Writing. His work also earned the series a BAFTA Award nomination for Best International Series. Jeff has also co-created and executive-produced several television series, most recently Overruled!, which earned him a Gemini award in 2010 for best children's series.

Recognizing the need for killer content on tablet devices, Jeff co-founded PadWorx Digital Media Inc. PadWorx's first two book/apps were both crowned iTunes "Apps of the Week", with Dracula: The Official Stoker Family Edition going on to win a Publishing Innovation Award for Fiction in 2010.

In his spare time Jeff is married and has four kids. 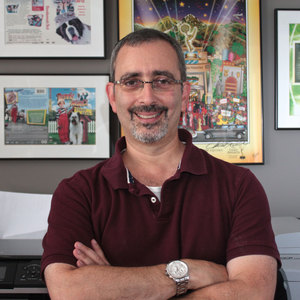 How Much Description is Too Much?

Our reader Sara asks:
As a new writer trying to get a handle on what is SEEN ONLY, I find getting my character's feelings and objectives across ... challenging. How much latitude can be taken in such descriptions? What about adjectives and adverbs? I realize one shouldn't use 'Kelly's playful entrance floods him with a long-forgotten sense of whimsy. The other board members ... (read more)

Question: The first five pages of my script contain a lot more movement than speech. Because of this, it's exceeding the one-page-per minute rule. It just seems to take me more pages to describe action than it does for dialogue. Is this a common problem? Do readers take this into account? Can you give me a bit of advice to either put my mind at ease or teach my to overcome this... (read more)

My Story Can Beat Up Your Story: The Missing Chapter

How embarrassing is it for a writer to forget to write a chapter of his or her own book? Especially, a book about…uh…writing?

Back when my book on story structure, My Story Can Beat Up Your Story!,... (read more)